skip to main | skip to sidebar

The time has come. My little blogging experiment is at its end, due to a variety of reasons, most of which are that school is taking over as top priority right now. Also, I think I've come to a point where instead of reflecting on life, I need to concentrate on living it for a while. So, if you've been back to this mostly-abandoned blogspot in a while...thanks. Thanks for reading and commenting over the past year and a half. I'll still be poking around in your blogs every once in a while, and hopefully leaving a comment or two. But for the time being, mine is over.

Thanks for making the experience worthwhile!

I can't wait for this weekend to come. I'm going on an outing with some of my Yosakoi friends to a special performance in the area. We're going to...

Visit the Nelson-Adkins Museum of art....

Possibly go to the Country Club Plaza or the Kemper Museum of Contemporary Art...

And the reason for the entire trip: the Yamato Taiko group from Japan. The video just doesn't do it justice.

penny for your thoughts

Should I be so lucky to find a penny today, it would be the fourth Wednesday in a row that I came across spare change lying on the ground. The first two times it was a dime, the second time, a nickel and a penny. At first I thought it was odd, finding spare change specifically on a Wednesday, but I think the more I find change, the more it becomes a self-fulfilling prophecy: if I think about finding change, I tend to look for it more, and the more I look for it, the more I actually find. When I told one of my friends about the dimes, he said "Wow, I'll have to hang out with you more." Yeah. And maybe in two and a half months we'll have enough change to go out for smoothies.

Anyway, along the lines of deep thoughts, there's a booth that is set up on our campus every week with a 'question of the week' that students can answer just for fun such as 'who is your hero?' Yesterday the booth was handing out freeze pops and asking 'why do people take themselves so seriously?' (Due to a recent cold snap, I think they'd get more traffic if they handed out hot cider, but that's beside the point.)

I didn't stop at the booth, but it got me thinking. I think people take themselves so seriously because they realize that they have a finite amount of time on the earth, and they feel like they have to accomplish something while they're here. I read some survey this summer that said people's biggest fears weren't heights or public speaking or spiders or anything like that. The biggest fear was dying without having left a mark on the earth, and having no one to remember them. I think that would be enough to make people take themselves too seriously.

In lighter news, it's getting to be my favorite time of the year: fall! There's a million reasons to love it, such as the ones I blogged about last year. But this fall is even more interesting because I got to try my hand at pumpkin carving for the first time. We got pumpkins at a local produce market and carved them in my friend's room. My humble attempts at a jack-o-lantern are documented below. 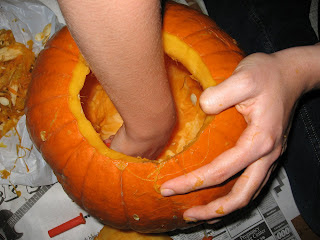 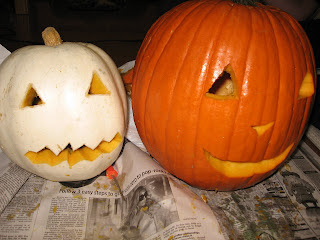 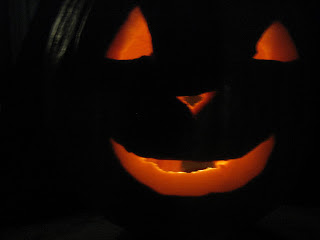 i will be back 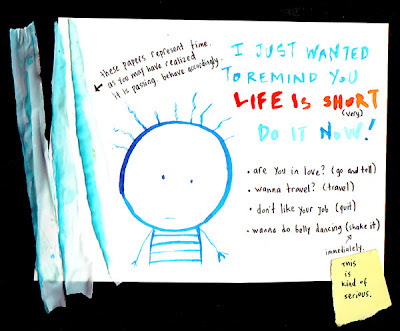 This makes my day.

I found a carton of concentrate for Calpis water at an oriental food store in town. It was one of my addictions in Japan, and now in the U.S. as well. I can't wait to try it here, even though it probably won't taste quite the same as when a convenience store clerk hands it to you in a plastic bag with a polite bow and a cheerful "Arigatou gozaimas!"

It's still really, really good.
Thought up by Greta at 4:55 pm No comments:

and so it goes

I have never studied so much in my life. What happened to the transition from freshman year to sophomore? I'm not an upperclassman yet, but the workload seems to have quadrupled. It feels like finals week already.

The first round of tests is here; two down and two to go. So far, so good. And I now know enough Japanese to ask if someone is from China, Korea, the U.S., England, etc. so I must be getting somewhere. I would post more, but I have to go study archaeology. Maybe sometime soon.
Thought up by Greta at 11:07 am 1 comment:

the story so far

I'm just about to complete my second week back at school, and things are off to a pretty good start. This is largely because I just got internet access back in my room after several days of network problems that were annoyingly reminiscent of last semester.

But seriously, I have a good job (night supervisor at the International Student Center = lots of time to do homework), and am settling into my two-person room (although I'm hardly ever there. I seem to live in the library...) And Yosakoi is back in full swing, evidenced by the excruciating pain every time I move my shoulders after Tuesday's practice. We have a lot of new members who ask me how to do certain steps of the dance every time we need a break, which is good, but leaves me exhausted. On second thought, it's good for me too - I have to know my stuff.

Otherwise classes have been pretty good so far. A brief overview:

Japanese is my favourite by far. I was a little intimidated the first day when our teacher walked in the door and started speaking rapid-fire Japanese without any explanation until the end of class. But I'm learning lots of useful phrases and just completed the hiragana alphabet today. Interesting quote thus far (from a handout): "When you are speaking Japanese, you should avoid English speech fillers such as uh, and make an effort to use the Japanese ones."

Archaeology is interesting; it's been a little dry, but we have learned about the Three Age dating system, and that all archaeologists do not run around with a pith helmet and whip like Indiana Jones. Interesting quote thus far: Professor - "You've all used grids since elementary school. Can anyone tell me briefly what a grid is?" Student - "It's a bunch of triangles put next to each other."

Information Gathering is basically a semester-long research tutorial leading up to what will be a ginormous paper on a media policy issue. My topic of choice, though still in the brainstorming stage, is the implications of using English-only or bilingual newspapers. Apparently we will learn to use the library and other databases, and how to track down and interview experts. Oh, and we will learn how to use Google in ways we have never used Google before. If there has been an interesting quote yet, I've missed it.

American Ethnic Studies is just what it sounds like - studies of different ethnic groups in America. Racism. Cultural pluralism. That sort of thing. Interesting quote thus far (during roll call on the first day, when calling my last name in front of 80 students): Professor - "There is no way you can get (insert last name) from that spelling. See, look -" Yeah, my name was on the chalk board for the entire class period.

Population Dynamics has only met twice, but I think I'm going to like it. Kind of like Am. Ethnic studies, but it tells what the groups do, and why. My professor is from Hungary and likes to slip in comparisons of his country into class, which makes it interesting. There are only about 10 of us in the class, too - not a bad ratio. Interesting quote thus far: "Now, let's get down to the black soup, as they say in Hungary."

Greta
I'm an anthropology student from Kansas State University going to Malta for a 3-week field school this summer to explore the influence of economics, trade and culture on the island's food - or is it the other way around? This blog will function as a way for me to organize my thoughts, look back at my project as it develops and most importantly to keep in touch with family, friends and fellow students as I undertake the research this summer.